An ongoing war is waged daily between large format printers and substrate static electricity generated by styrene faced sign materials. We have witnessed battle scars ranging from edge overspray to ghosting lines in prints caused by static fields misdirecting ink droplets as they leave the printhead and travel to the substrate surface.

To vanquish an enemy, you have to know them. Let’s begin with understand what substrate static is.

Electrostatic Discharge (ESD), is commonly referred to as static. ESD is what you felt when you shuffled you feet across the living room floor and then devilishly shocked your nearest parent or sibling. The “shock”, was the discharge of particles stored in your body passed on to your unsuspecting victim.

Let’s take a quick physics refresher to better understand what is happening. Electricity is made up of atoms consisting of 3 basic parts:

When an atom has the same number of protons and electrons it is stable or has a neutral electrical charge.
When atoms have differing amounts of protons in relation to electrons it is considered unstable; resulting in a static charge. 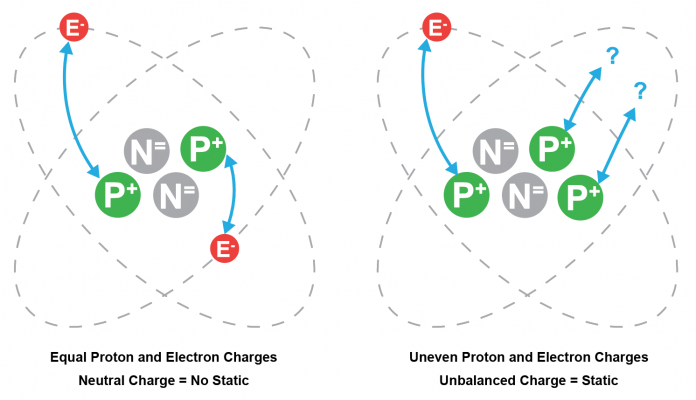 Now, stay with me.
Negatively charged electrons encircling an atom can travel freely back and forth among other atoms. When this movement is unrestricted, the atoms quickly stabilize as the electrons flow freely and evenly; occurring within mediums known as conductors. Plastics including styrene, are insulators against the flow of electrons between atoms; resulting in unstable atoms and a static charge.

How Humidity Relates to Substrate Static

Whew! Okay, So How Do We Fight Substrate Static?

Now that we know our enemy a little better, we can plan our attack. Since we now understand that static is caused by atoms with uneven ratios of protons vs. electrons, we need some artillery that can resolve this. Let’s look at several popular methods currently available.

Electrostatic Discharge Ionizing Guns
ESD’s are available as a pressurized gun or wand device that distributes neutrally charged ionized air across the surface of your substrate. The ionized air attracts electrons away from the substrate’s surface atoms resulting an evenly charged and neutral atoms; thus dissipating the  static charge from your sign substrate. Examples of these devices include:

Electrostatic Discharge Wands
ESD wands may consist of a rod or string that comes in contact with the sign substrate as it is fed into the machine. These wands are grounded to the printer chassis to assist in the discharge of electrostatic. Examples of these include:

Humidifiers
Controlling humidity in your printing environment can greatly reduce electrostatic charge with sign substrates.
Examples of these may include:

UltraBoard is a premium line of foam core board products widely used by the digital imaging, photographic and graphic arts industries.
LEARN MORE

This website uses cookies to improve your experience while you navigate through the website. Out of these cookies, the cookies that are categorized as necessary are stored on your browser as they are essential for the working of basic functionalities of the website. We also use third-party cookies that help us analyze and understand how you use this website. These cookies will be stored in your browser only with your consent. You also have the option to opt-out of these cookies. But opting out of some of these cookies may have an effect on your browsing experience.
Necessary Always Enabled
Necessary cookies are absolutely essential for the website to function properly. This category only includes cookies that ensures basic functionalities and security features of the website. These cookies do not store any personal information.
Non-necessary
Any cookies that may not be particularly necessary for the website to function and is used specifically to collect user personal data via analytics, ads, other embedded contents are termed as non-necessary cookies. It is mandatory to procure user consent prior to running these cookies on your website.
SAVE & ACCEPT